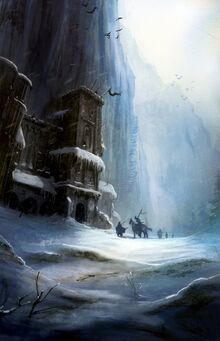 The Night's Watch is a military order dedicated to holding the Wall, the immense fortification on the northern border of the Seven Kingdoms, defending the realms of men from what lies beyond the Wall. The order's foundation dates back to the Age of Heroes, at the time when the Others were pushed back. The men of Night's Watch wear only black, and they are known as black brothers. Recruits who join the Watch are said to take the black.

When recruits are considered ready to take the black, they say their vows either in a sept or before a heart tree. The vows are as follows:

"Night gathers, and now my watch begins. It shall not end until my death. I shall take no wife, hold no lands, father no children. I shall wear no crowns and win no glory. I shall live and die at my post. I am the sword in the darkness. I am the watcher on the walls. I am the fire that burns against the cold, the light that brings the dawn, the horn that wakes the sleepers, the shield that guards the realms of men. I pledge my life and honor to the Night's Watch, for this night and all the nights to come."

Brothers of the Night's Watch serve for life. It is customary to finish a black brother's eulogy with the words, "And now his watch is ended."

The Night's Watch is one of the oldest orders in the Seven Kingdoms, as it survived the fall of the kingdoms of the First Men, the Andal invasion, and Aegon's Conquest. It was founded over eight thousand years ago, at the end of the Long Night. Under cover of an endless night that lasted for a generation, the Others invaded from the Lands of Always Winter, laying waste to much of Westeros. The Others were finally defeated by the Night's Watch at the Battle for the Dawn, which is recalled in "The Night That Ended". The Wall was allegedly built by Bran the Builder in order to protect the Seven Kingdoms, with the brothers of the Night's Watch choosing their own Lord Commander since that time. During the Age of Heroes it was also recorded that the children of the forest gave the Night's Watch a hundred obsidian daggers every year.

Other than the corrupting of the thirteenth Lord Commander, the "Night's King," further attacks by the Others never came, however. Instead, the most frequent attacks came from the wildlings, sometimes led by their Kings-Beyond-the-Wall, and their constant attempts at raiding in the north.

The Night's Watch built nineteen castles along the hundred leagues of the Wall. At the zenith of its power, the Watch had seventeen of the castles manned, with over ten thousand men-at-arms between them. Castle Black alone quartered five thousand fighting men with all their horses, servants, and equipment. The highborn of the north have traditionally considered it an honor to serve on the Wall. Many younger sons of northern houses, low in the line of succession, gladly took the black. Shields of nobles from the Hundred Kingdoms of Westeros were proudly displayed in the Shieldhall at Castle Black. Little by little, the Night's Watch forgot that its main mission was not the fight against the wildlings, but against the Others.

The Seven Kingdoms of Westeros were invaded by the Targaryens during Aegon's Conquest. Although Lord Commander Hoare was the brother of King Harren the Black, the lord commander maintained the neutrality of the ten thousand black brothers under his command, even when Harren died during the burning of Harrenhal. King Aegon I Targaryen became Lord of the Seven Kingdoms and ruled from the Iron Throne in King's Landing.

The manpower of the Night's Watch has decreased more and more, with most of Westeros neglecting the Wall. Only the north, particularly the Starks, have the memory of the old days, but even they believe the Others are no more than vague figures in stories told to frighten children. The Starks resented King Jaehaerys I Targaryen granting the New Gift to the Watch. The black brothers arrived late at Long Lake, where the King-Beyond-the-Wall Raymun Redbeard was defeated by the Starks and Umbers.

By 297, during the reign of King Robert I Baratheon, only three castles remain in use—Castle Black, Eastwatch-by-the-Sea, and the Shadow Tower—and the Night's Watch's numbers have dwindled to fewer than a thousand men. The Night's Watch is now largely made up of the misfits of the Seven Kingdoms: peasants, debtors, poachers, rapers, thieves, and bastards. Only a few of the noble and knightly houses south of the Neck have members in the Night's Watch, and most serve because they fell afoul of political machinations or fought on the wrong side of a war. However, there have been fewer wars since the War of Conquest.

According to Grand Maester Pycelle the Wall is a world apart, and news oft reaches them late. Stories of the Night's Watch are collected in Archmaester Harmune's Watchers on the Wall.

The Night's Watch's numbers had dwindled for years before the outbreak of the War of the Five Kings, and were further depleted by the losses suffered during the Great Ranging and the Battle of Castle Black. The Second War of Conquest brought a much-needed infusion of new blood to the Black Brothers. As the restored Targaryens consolidated their rule, a stream of knights and lords were sent to the Wall to take the black. The influx of new highborn Brothers of the Watch created tensions in the ranks, as some of the lowborn Brothers were now serving alongside some of the very same lords who sent them to the Wall in the first place. The former supporters of Tommen Baratheon and Cersei Lannister tended to band together with one another, despite the care the Watch's leadership took in separating them among Eastwatch, the Shadow Tower, and Castle Black. This faction rallied behind Ser Jaime Lannister during the election of the 1000th Lord Commander, but had little luck attracting support outside their own numbers.

When the Long Night finally ended, the Night's Watch focused on dealing with the Wildlings who had been allowed through the Wall by Jon Snow. Some tribes were eager to return north to their ancestral lands and leave the realms of the kneelers behind, but others wished to remain permanently. After a bloody fight to retake Greyguard from the Wildlings who had taken up residence, the Watch sent a raven to Winterfell for aid. Jon Stark tried to negotiate a resolution to the matter, but in the end he was forced to call his banners and push the Wildlings back into the realms beyond the Wall at spearpoint.

In 376 AC, a series of rangings determined that there was a group of hostile Wildlings beyond the wall that halted any attempts for further rangings north. Lord Commander Krelon called for a Great Ranging North, in which him and his 800 men slaughtered the wildling tribe led by a man by the name of Vigarun.

Eastwatch by the Sea saw a few probing attacks by the Skagosi raiders during The Scarlet Winter, but the invaders swiftly moved south toward easier targets. Ravens from Eastwatch warned Winterfell, Karhold, and the Last Hearth of the raiders.

Retrieved from "https://awoiaf-rp.fandom.com/wiki/The_Night%27s_Watch?oldid=20910"
Community content is available under CC-BY-SA unless otherwise noted.