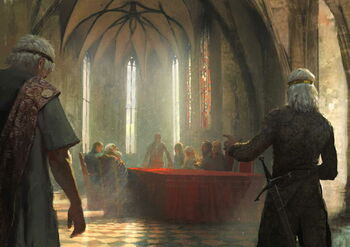 The Small Council is a group of advisers who advise the King of the Seven Kingdoms on matters of policy, and on their areas of expertise. It is not known when the first small council assembled, but it was in all likelihood during the reign of King Jaehaerys I Targaryen. The council is headed by the king, the only one who can make the council's decisions into law. In his absence the role falls to the Hand of the King or the regent if the king is too young.

The council members are appointed and dismissed by the king as he wills, a right freely used during times of war and strife. Traditionally the council consists of seven permanent members, after the Andal traditions and the Faith of the Seven - however it not unusual for the council to boast several extra bodies who act as advisers.

Hand of the King Edit

The Hand of the King is the chief advisor to the King on the Iron Throne, his second-in-command and often his post capable administrator. Duties of the Hand include commanding the king's armies, drafting laws, dispensing justice, and generally managing the day-to-day running of the kingdom. The Hand may act on the king's behalf when he is indisposed, and sit the Iron Throne while doing so. The Hand also sits on the small council and will run the council if the king is not present. The office typically makes the Hand the second-most powerful man in the kingdom next to the king, though some Hands had the reputation of ruling their kings.

Lord Commander of the Kingsguard Edit

The most senior member of the Kingsguard, the Lord Commander is an acting advisor on the security of the King and his royal family, as well as the overall security of the Red Keep and King's Landing as a whole. Often a talented knight and adept strategist, he serves a secondary role as a military advisor and possible general.

The Master of Coin is the chief financial adviser of the king. Duties include keeping account of the receipts and expenditures from the royal treasury, receiving reports from royal officials, supervising the collection of taxes and custom duties, borrowing money, managing the royal treasury and supervising the three royal mints. The master of coin oversees a large number of offices including the four Keepers of the Keys, the King's Counter, the King's Scales, the officers in charge of mints, harbormasters, tax farmers, customs sergeants, wool factors, toll collectors, pursers and wine factors.

The Master of Laws is the king's advisor relating to the administration of justice and the dealing of punishments for crime. Duties of the master of laws include managing the dungeons at the Red Keep and supervising the chief gaoler, chief undergaoler, undergaolers, and the King's Justice. The City Watch of King's Landing presumably falls under the juridiction of the master of laws. In addition it is he who drafts the official written version of the King's Laws, or amends existing ones.

The Master of Whisperers is the King's chief spymaster, charged with gathering intelligence on behalf on the crown. They ensure the safety of messages, manage spies, hire informants, consort with assassins, and collect information as far as they can from the many places across the Narrow Sea. This position is looked down upon as a job for cravens and miscreants, but provides an invaluable service nonetheless.

The Master of Ships is the king on the Iron Throne's advisor charged with running the royal fleet and administering the crown's navies. Duties of the master of ships include arranging for the building and maintenance of warships, obtaining crews for the warships and commanding naval operations. The building of ports and harbors, collection of maritime tariffs, and action against piracy are also duties.

The Grand Maester is considered the senior member of the order and serves as its representative to the king. He can only be made or unmade by the Conclave. He sits on the small council and acts as the king's adviser into matters of history, higher learning, and often the occult. The Grand Maester wears many interwoven maester chains to indicate his high office, but these do not reflect his true studies. Gems are woven into the chains.

Retrieved from "https://awoiaf-rp.fandom.com/wiki/Small_Council?oldid=16888"
Community content is available under CC-BY-SA unless otherwise noted.